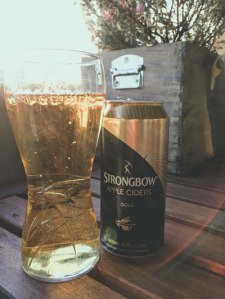 If you look closely, you can see the Finn nose prints and fur all over the glass. His contribution to this post, I guess?

Apologies for the delay. I’ve actually had a few reviews written and waiting in the wings for a while now. I just didn’t post them in a timely fashion because, if I had, I would’ve missed out on the fabulous alliterative opportunity presented in the previous sentence. Also: I’m just a terrible, lazy person.

I tried this one for the first time last weekend and decided to get back into the game with something fresh.

Now on to the Actual Cider Review for Strongbow Gold…

The Colour: Fresh golden yellow. Warm with a hint of green.

The Nose: Sweet, but not cloying. I’m not picking up much other than apple and a hint of caramel.

The Packaging: I appreciate that they kept the packaging for the new releases in line with the existent Strongbow cans. It’s still predominantly black with the simple knock-out logo, but the accent pieces are just different enough. They could have easily chosen one of the gold/yellow colours within the multi-tonal accent on the original Strongbow can, but the gold on this one is a lot more subtle and contemporary. The simple linear/radial burst draws the eye and is interesting without being busy. I’m also pretty keen on the subtle matte finish of the can itself. Let’s hope I have this much to say about the contents!

The Mouthfeel: It’s difficult to compare the feel of this one to Strongbow “Classic” for several reasons: one, the last time I had Strongbow, it was draught and two, I quite simply don’t have one here currently from which to draw a comparison. That rambling aside, it has pretty light carbonation. Not weak; I can feel a little burst on my tongue at first sip. But it’s just that: a burst. It’s not aggressively carbonated. Paired with the slightly heavy, syrupy feel, I think it creates a nice mouthfeel overall.

The Taste: Not like Strongbow. There are hints of traditional Strongbow in the linger/taper-off phase, but at the beginning it’s a completely different beast altogether. It’s sweet. Caramel-forward. The apple is obvious and nice. There’s no “old” apple taste, nor is it super crisp/fresh. Honestly, altogether it kind of reminds me of a caramel candy apple– just less sweet. If caramel apples are child-level sweet, I guess this would be adult: more refined and subtle. More mature and self-aware.

Fittingly, there is a hint of bitterness at the end. It’s a nice way to cap it off, because it makes you want to take another sip to mitigate the bitterness. This is probably apt or something.

The Verdict: I like it! It’s very well-balanced. Probably a lot more accessible and in-line with what most people expect or want out of a cider. I know a lot of people who actively dislike Strongbow because it’s “like the beer of ciders,” and no one could make the same claim of the Gold offering. There’s no real gimmick to this, other than it’s … I dunno … a more cider-y Strongbow. That said, there aren’t any interesting nuances to the drink, and nothing really knocked my socks off.  It’s a solid addition to the Strongbow line, and fills a void in their offerings (at least their offerings here in Alberta/Canada. I’m too lazy to research what they’ve got going on elsewhere), but it’s not going to impress any cider snobs. Altogether, I’d give this 2 ingots out of 3-and-a-third.

Check out my review of Strongbow’s Elderflower Cider offering (if you haven’t already, obvs).

Have you tried it? What’d you think? Let me know in the comments below or give it your own rating.