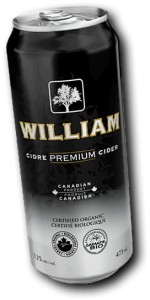 I’mma tell you straight up: this comes across as a Strongbow analog.

William Premium Cider‘s mouthfeel is a little different. It’s nicely carbonated (although if you’d asked me after my first sip, I probably would’ve said “aggressively carbonated.” That has more to do with sneezing upon taking a sip than the amount of carbonation, really. My nose hurts.) There’s a lingering “thickness” after you swallow. It’s kind of gross. Even that sentence describing it was gross. Gross.

The colour is: goldeny. Very golden. Maybe slightly more than S’bow (this looks a little syrupy.) I can’t really comment definitively as I don’t have a pint of Strongbow in front of me to compare it to. Rookie mistake, I know.

It smells pretty S’bowy, though. You know how Strongbow is the cider for people who don’t like cider (or the idea of cider, anyway)? That’s because it’s not particularly apple-y. Nor is William Cider. There’s like, a hint of apple. It doesn’t have a strong scent, really. Actually, what it reminds me of more than anything is walking into a tobacconist. Which is weird, because it doesn’t smell like tobacco at all. Maybe it’s a stale, dried fruit smell? Yum!

William Premium Cider tastes a little bit more appley than S’bow. It’s tart, but not offensively so. Just enough to balance out the sweetness (but not the thickness. Nothing could balance that out. Grooosssss.)

Honestly. This just seems like a poor man’ S’bow. Except I don’t think it’s any cheaper –don’t quote me on that; I keep throwing out my receipts– and I don’t like the packaging as much. The packaging seems… I dunno… lazy somehow. I don’t mind the image and the typeface, but the plain ol’ black gradient background is snoozeville. (Excuse me, Snoozeville.) Also, Strongbow has a special place in my heart, and it just simply can’t be replaced by some pretender .

Have you tried it? What’d you think? Let me know in the comments below.